Have general questions about DOVIA? Use the contact form! 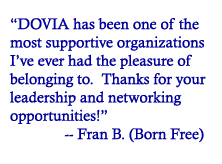 The vision of DOVIA Mississippi is to create an environment where volunteers help make the most of scarce agency resources by stretching dollars. Effective volunteers allow agencies to explore new horizons by providing skilled human capital to pilot new programs. DOVIA Mississippi (Central Chapter) supports volunteerism by encouraging cooperation and increasing networking opportunities for directors of volunteers in agencies and others interested in volunteerism.

The mission of DOVIA Mississippi (Central Chapter) is to increase the management skills of directors of nonprofits and volunteer agencies; create networking and cooperative activities; act as a clearinghouse for employment and service opportunities, events, and awards; and highlight volunteerism as a valuable resource for Mississippi.

This version of the By-laws was edited on January 10, 2011 by Michele Baker, Vice President for Programs, and accepted by a majority vote of paid membership on February 16, 2011.

The name of the organization shall be DOVIA (DIRECTORS OF VOLUNTEERS IN AGENCIES) MISSISSIPPI – CENTRAL MISSISSIPPI CHAPTER.

The purpose of the organization shall be: To provide a focal point, forum, and conduit for communication, cooperation, and action among those interested and concerned about community and volunteer services, including volunteer administration.

DOVIA MISSISSIPPI – CENTRAL MISSISSIPI CHAPTER (hereafter referred to as DOVIA Miss.) is formed as an unincorporated association and not for pecuniary profit or financial gain. No part of the assets, income, or profit of the DOVIA Miss. shall be distributable to, or inure to the benefit of, its members, directors, or officers.

Membership shall be open to all individuals; non-profit groups or organizations established to deal with, or directly concerned with, matters of interest to community service providers; and to any other interested parties. Annual dues will be collected at the beginning of the fiscal year. The fiscal year is January 1 through December 31.

The management and administration of the affairs of DOVIA Miss. shall be under the auspices of the Steering Committee.

The By-Laws may be amended at any time by: 1) unanimous vote at any meeting of The By-Laws Committee and confirmed by a two-thirds vote of paid members at any general Membership meeting, or 2) by proxy vote/polling the entire paid membership (whether by paper or electronic means), in which the outcome is two-thirds (2/3) in favor of the amendments. Either method requires not less than ten (10) days notice via e-mail of such proposed amendment(s) to all paid members.

Twenty-five percent (25%) of paid membership shall constitute a quorum for the transaction of business.

The officers shall be elected from and by the Membership present at the December meeting OR BY ELECTRONIC VOTE TO THE ENTIRE MEMBERSHIP.  NOMINATIONS AND ELECTIONS MAY BE CONDUCTED ELECTRONICALLY WITH 14-DAYS’ NOTICE. OFFICERS shall take office at the January meeting.

2. DUTIES OF THE OFFICERS

There shall be at least nine (9) membership meetings during the fiscal year of January through December.

In all matters of procedure not covered by the By-Laws, Robert’s Rules of Order, Current Edition, shall be the parliamentary authority.

The standing Rules may be amended at any time by unanimous vote at any meeting of the Steering Committee and confirmed by a two-thirds (2/3) vote of paid members at any general Membership meeting, provided that not less than (10) days notice of such proposed amendment shall have been given to all paid members.

The By-Laws and standing rules shall be effective when approved by a majority vote of paid members of DOVIA Miss.